A fundraiser hosted by JOURNEYS Young Professional Board 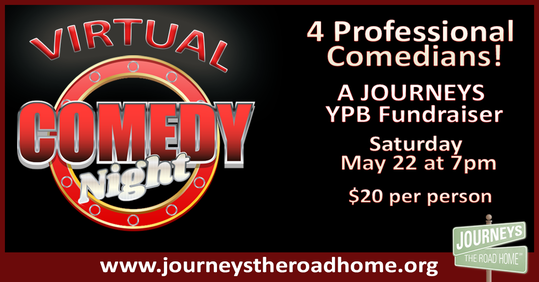 $20/per person
Recommended for ages 18+
ABOUT THE COMEDIANS
Vik Pandya is a nationally touring stand up comic based in Chicago. Known for his sharp self-deprecation, observational humor on dating, & hilarious crowd work, his comedy album 'Friends With 401(k) Benefits' debuted #1 on iTunes & Top 10 on the Billboard Charts in 2019. Vik has opened for both Roy Wood Jr. & Michelle Wolf and performs regularly at Zanies Comedy Club,The Laugh Factory, & The Improv in Chicago. He was featured in San Francisco’s Sketchfest in 2020, and NBC's Breakout Comedy Festival in 2018.
​He's shared the stage with mainstream headliners such as: Godfrey, Dan Soder, Big Jay Oakerson - as well as international acts like Vir Das, Zakir Khan & Atul Khatri. Vik's comedy has appeared in Vulture, the Chicago Sun Times, & the Chicago Tribune.
Follow him on instagram & twitter @vikpandya
Dan Hickey is a fresh new comic from Chicago, IL. When he’s not on stage telling stories he hopes his mother never hears, you can find him putting his music degree to good use teaching 10 year olds how to play Baby Shark. Check him out on Twitter and Instagram at @thedthickey.
Amy Schwartz  is a stand-up comedian, Second City Alumni writer, radio host, producer, and actor/ improvisor who has performed at festivals and colleges all over in the before times. Now you can see her on screens or outdoors everywhere! She is on the Zanies Comedy Club roster and performs at the Laugh Factory as a stand-up, writer and producer. She is a member of B.A.D. Waves Radio on Que4.org & B.A.D.Waves Remix at the Laugh Factory. Amy has a rawness and charm that will leave you thinking & laughing long after the show.
Becca Tham is an up and coming Chicago comedian with a love for cat memes. Her writing/performance has been featured at: The Laugh Factory, The Annoyance Theatre, iO Theater, The Second City, The Hideout, Stage 773, and more. She was featured in the Chicago Sketch Comedy Festival 2020. Becca's mixed Asian-Jewish perspective lends a unique, friendly grit to her storytelling in stand up, sketch comedy, and writing. Find her on Instagram: @beccahasokhai